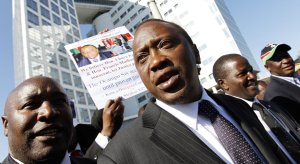 The motion was brought by the Leader of the Majority in Parliament, Aden Duale.

The current President Uhuru Kenyatta and Deputy President William Ruto are facing charges of crimes against humanity for planning and funding violence that followed the national elections in Kenya in 2007-2008 and that killed 1 133 people.

Spokesperson for the ICC, Fadi el Abdallah, has stated that the cases against Mr Kenyatta and Mr Ruto, as well as their co-accused, former radio presenter Joshua Sang, will continue regardless of a withdrawal by the Kenyan State:

“As indicated in the Rome Statute of the ICC, a withdrawal does not have any impact on the open cases nor on the State’s obligations regarding cases that are already open before the ICC.”

“[a] withdrawal can be effective only one year after the deposit of the withdrawal notification to the United Nations Secretary General.”

The trial of Mr Ruto is set to start on 10 September with Mr Kenyatta’s to follow from 10 November.