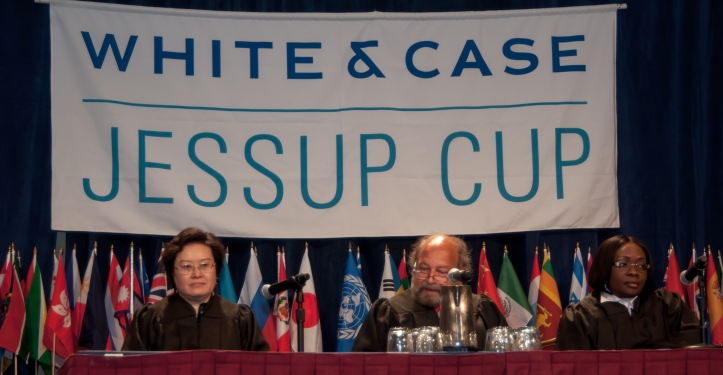 The International Law Students Association (ILSA) has announced the release of the 2014 Jessup Compromis.

Jessup is the world’s largest moot court competition, with participants from over 550 law schools in more than 80 countries. The Competition is a simulation of a fictional dispute between countries before the International Court of Justice, the judicial organ of the United Nations. One team is allowed to participate from every eligible school. Teams prepare oral and written pleadings arguing both the applicant and respondent positions of the case.

Thousands of law students from around the world will work all year long on the season’s Jessup Problem, which for 2014 concerns the conflict between maritime development and conservation, criminal jurisdiction and maritime salvage rights. Most students must first compete in qualifying competitions (mostly held in January-March) to earn the right to advance to the White & Case International Rounds held every spring in Washington, D.C.

You can watch the 2013 Jessup Final Round Promo here:

In 2013 Colombia was represented by Universidad de los Andes (# 34). Universidad del Rosario was awarded as the Best Exhibition Team in the Best Applicant Memorial and Best Respondent Memorial category. The 2013 Jessup World Champion was the National Law School of India University (India).

15 November 2013: DEADLINE for Registration (Online Form and Payment) for all Teams

15 January 2014: DEADLINE for Submission of Memorials.

You can find the complete schedule here.

History of the Jessup Competition

Originally named the “International Law Moot,” the Jessup Competition held its first round at Harvard University on 8 May 1960. The round, comprised only of Harvard Law students, involved a team of two American law students, Thomas J. Farer and William Zabel, and a team of two foreign LL.M. students, Ivan L. Head of Canada and Bernard H. Clark of New Zealand. The first Jessup problem was titled “Cuban Agrarian Reform Case” and was written by then Professor Schwebel. Since 1960, the Jessup Competition has been held annually, and student participation has increased dramatically.

From Afghanistan to Vietnam, Jessup Competition has engaged students from approximately 600 schools around the world, representing more than 80 countries, and making the Jessup Competition by far the largest Moot Court Competition in the world. Former Jessup participants now work at foreign, finance, and justice ministries in increasing numbers. They can also be found in the world’s finest law firms, corporations, universities, parliaments, and international organizations. Jessup participants worldwide continue to contribute their efforts to the development of international legal education, as well as international law itself.

More than a competition, the Jessup is a community of legal professionals, young and old, who build bonds and share an invaluable cultural and academic exchange with each other. Now, the Jessup Competition has a rich history and a longstanding commitment to promote the importance of the rule of law in the peaceful resolution of disputes.

Who was Philip C. Jessup?

The Jessup Competition is named after the Honorable Philip C. Jessup. Born in 1897 in New York, Judge Jessup received his bachelor’s degree from Hamilton College and his LL.B. from Yale University. He earned a Master’s degree and Ph.D. from Columbia University and later, an LL.D. from Hamilton College. Judge Jessup had a long and distinguished academic, judicial, and diplomatic career. From 1961 to 1970, he was a member of the International Court of Justice.  He practiced law and taught at several American universities until 1961. Jessup was an assistant to Elihu Root during the 1929 Conference of Jurists on the Permanent Court of International Justice.

In 1964, Judge Jessup was awarded The American Society of International Law’s Manley O. Hudson Medal for preeminent scholarship and achievement in international law and for the promotion of the establishment and maintenance of international relations on the basis of law and justice. Judge Jessup continued to lecture and teach until his death in 1986.